I cannot believe this guys is almost 1!  I have a lot of memories from last December, waddling around the neighborhood for exercise (running downgraded to jogging downgraded to wogging downgraded to walking) and watching Natalie’s basketball practice on an uncomfortable gym floor barely being able to get back up.  So, it feels SO MUCH BETTER to be running 6 miles, lifting weights, sleeping through the night, etc.  2019 wasn’t easy, but it was worth it.  See below for some amazing pictures! 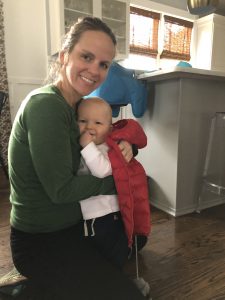 This is my happy place 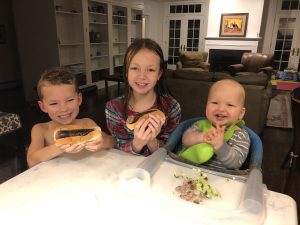 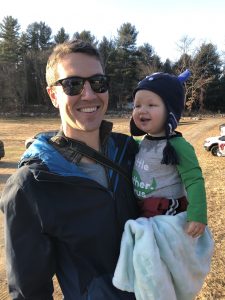 Isn’t my Dad the best? He’s strong. He can hold me forever. And his teeth are so white. 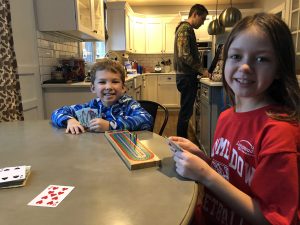 Why do my brother and sister get to have all the fun when I’m sleeping? Give me some of those small cribbage pieces to put in my mouth. And cards to crunch. 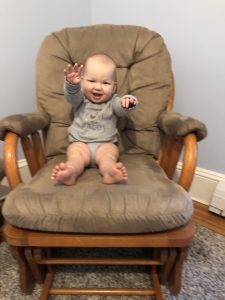 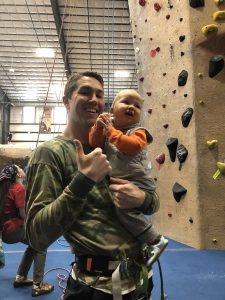 My sister and brother like to climb up these walls. I, instead, recommend pulling on the ropes.

Mom, give me some of your oatmeal.

Weight: He’s around 25 lbs and at the top of the scales.

Personality:  Amazing.  He is happy to see all of us.  He makes us laugh and laughs along with us.  He is a chatterbox.  He has a lot to say.  It seems like he is really good at “parroting” what we say.  I swear, we’ve heard the following: love ya, blueberry, banana, yum, brother, Natalie, etc.  (There’s more too – I just cannot remember them all.)

Funny story: On Sunday, I fed Conor lunch as quickly as possible because we wanted to take Natalie and Elliott rock climbing for an early Christmas gift.  His last thing to eat was eggs.  A few minutes after I got him out of his high chair and was holding him, he had a big burb.  A big egg burb.  I scrunched up my nose, plugged my nose and then waved my hand in front of my nose and said “PU”.  He laughed aloud.  We were all there to hear it, so we all laughed.  It was awesome.

Favorite foods: Blueberries (which is very appropriate, given his nickname before birth was Blueberry), Oatmeal and O’s.  He likes a lot of other things too but is getting a little more picky.  Bananas used to be a favorite and aren’t any longer.

Another funny story (the beginning is not funny): My cousin Matt passed away 13 years ago on December 8th.  He was 20, I believe.  I was telling Natalie and Elliott about him.  There’s many fun and funny things to share because Matt was hilarious.  One of my favorites is when he was in elementary school.  “Your mama is so fat…” jokes were popular, and he had the best one: “Your mama is so fat that when she sat on a rainbow, Skittles popped out.”  This inspired some “Your baby brother is so fat” jokes as well, like “Your baby is so fat that O’s get stuck in his neck fat and under his double chin.”

New interests: When we finish up dinner and are cleaning up, he loves to crawl all around the island area – sometimes picking up some extra food that he dropped – and explore the pantry as well.  (So gross when he explores the broom.)  He has now found the tuperware cupboard, so there’s no hope of neatness there.  I do have to admit though, its much better than him helping with the dishwasher, which is right next to the tuperware cabinet.  Pulling out forks seems like a recipe for disaster.  He also loves this “Baby,” which is a small doll that Elliott used to have and call “Little Boy.”

Physical talents: Okay, I know that some kids can walk by now (including his only baby friend, Sarah).  My kids have always been so girth-filled that their physical movements have been on the slower side.  However, Conor can stand like a champ.  He can stand for 10-15 seconds, even on soft surfaces like my bed, and then does a deep knee bend to get back down.  Oh yeah.

Schedule: He usually sleeps from about 7:15 p.m. to 7 a.m. with a morning nap of 1-1.5 hours and an afternoon nap of 1-1.5 hours (always up by 5 p.m.).  He is nursing 3-4 times a day, depending on whether I’m home or not and has seemed to ban bottles, which isn’t a big deal since he eats so many big meals a day.  It can take him up to an hour to finish a meal sometimes.  And, its not because he is a slow eater.  Email me if you want to see a video of him chowing on blueberries.  During weekdays, he is with our nanny, Kaitlynn, who he loves.  She is so good about playing all sorts of stuff around the house with him.

Sibling Relationships: Elliott gives a really sweet “Nigh, Nigh Conor” (higher voice than normal) with a little peck or hug.  Natalie gets upset with me if I put him down for nap or bedtime without an extensive good bye from her.  Even when she is done eating breakfast in the morning and needs to go upstairs to brush her teeth, she has an extensive “see you later” process, which includes her walking backwards slowly, waving, and saying “see you later Conor” with a huge smile on her face.   It’s no wonder that when he gets a chance to crawl out of his bedroom, he totally bypasses the dangerous stairs right there and goes straight for Natalie’s room.  There’s so much in there that he would LOVE to get his hands on.  And, it nearly always contains one of his favorite people!  (When he does get in there, she emphatically pleas with me to pick him up, which I do understand.  There’s a lot of little pieces of legos, etc. all around.)

We are definitely lucky!

This entry was posted in Uncategorized. Bookmark the permalink.